Reflective of the Population

by Peggy Reisser. Winter 2021. Our Tennessee

The path to medical school began in high school for Memphis native Jasmine Jefferson when she met a woman who would become her mentor, her cheerleader and, soon, her colleague in health care. [Read full article here]

Jefferson, now a third-year student in the UT Health Science Center College of Medicine, was considering a future in medicine or engineering in high school. But Christina Rosenthal, a Memphis dentist, UTHSC alumna and founder of Determined to be a Doctor Someday (DDS), a mentoring program for high school-age minority and underrepresented students, tipped Jefferson’s scales in favor of a career in medicine.

Jefferson, 24, says the DDS program exposed her to the possibility of a career in health care in a way she had not been before.

“It definitely helped provide a support system,” she says. “During the program, we had a lot of different speakers come in and talk to us about their experiences in the health-care field and about becoming a doctor. And then we also had some activities that were geared toward medicine. We had one activity where we learned how to suture, which was really cool.”

She recalls walking on the UTHSC campus in Memphis for the first time. [Read full article here] 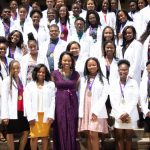